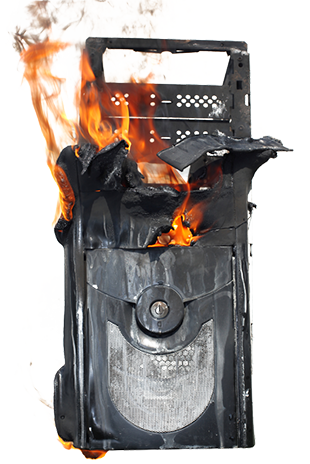 You may or may not be familiar with the term, but “e-waste” is by definition electronic waste. This includes old cell phones, laptops, tablets, televisions, refrigerators and any other forgotten gizmo that is tossed into our landfills. While there are many recycling programs available to help, but unfortunately these are not enough to keep up with the massive amounts of e-waste being generated daily.

Here is a look at some facts we found rather shocking:

1. The sheer amount we throw away

This is a global problem. According to the U.N., the amount of nonrecycled e-waste is expected to increase nearly 30% from 48.9 million tons worldwide in 2012 to 65.4 million tons in 2017. To put that in perspective, it would be the weight equivalent of approximately 200 Empire State Buildings or 11 Great Pyramids of Giza!

In 2009, America alone threw away more than 350,000 cell phones and 130,000 computers every single day. In 2011, the U.S. recycled 12 million cell phones, though it collectively purchased 120 million. Seeing as how the lifespan average for computers and laptops has decreased from six years in 1997 to two years in 2005, these numbers will only continue to surge in time. The lifespan of mobile phones is dropping, currently coming in at only 18 months.

While the majority of these products are simply thrown away, there are large amounts that are sent in for recycling. When the recycling is not done properly, or the products are deemed unfit for reuse and have to be completely broken down, that too becomes e-waste.

2. Recycling e-waste can be lucrative

There is a lot of money to be made in the recycling of electronic equipment. In materials alone, it has been noted that for every million cellular devices that are properly recycled, 35,274 pounds of copper, 772 pounds of silver, 75 pounds of gold, and 33 pounds of palladium could be recovered. Although the market value for these metals fluctuates, it’s easy to see that this could be a very profitable venture.

Even without the profitability, the fact remains that electronics recycling is absolutely necessary. Failure to recycle our outdated electronics is leading to shortages of rare earth minerals needed to continue making these electronics in the future, which will undeniably make recycling them valuable.

With e-waste recycling and disposal being such a profitable business, sometimes less-than-reputable companies get involved. It is extremely important that you take care to vet a potential recycler for your used goods. You may want to use one affiliated with your local electronics and office supply store, such as Office Max, Staples or Office Depot.

3. Identity theft continues to get easier

If you think back to all the electronic devices and computers you have discarded, how many you did actually wipe and reformat before disposal? Odds are that answer is not 100%.

There was a report in 2011 from ZDNet that revealed in Ghana alone there have been roughly 500 containers of e-waste dumped illegally each month. Local citizens sort through the waste for copper and other valuable metals, but less-than-savory characters are taking hard drives to scour for private information. They are interested in log-ins, passwords, bank account information, pictures and anything they can get their hands on that can be sold on the black market.

In the report, there is an interview with Adrian Briscoe, who is the General Manager of the Asia Pacific region for the data recovery company Kroll Ontrack. Briscoe revealed that it would not be out of place to discover sensitive information still on hard drives that have been classified as e-waste. He went on to say, “A lot of people give over their computers with the idea that they’re going to be erased properly and then dismantled in a proper and green way, but obviously that’s not the case.”

It is recommended to not only reformat any hard drives you recycle, but also to use a degausser that sends a pulse of electronic radiation to physically wipe the drive. Briscoe points out, “I don’t think people necessarily understand the dangers of just releasing a computer back… they have no guarantee that once they release a computer physically, that the data won’t turn up again because they have not actually witness [sic] the data being erased.”

Ghana is not the only place in the world that is inundated with massive shipments of e-waste. In nations where labor is inexpensive and land is plentiful there are villages, such as Guiyu, China, that have been overrun by piles of laptops, keyboards and other e-waste. While workers labor diligently to separate components that can indeed be recycled, at the rate of more than 1.5 million pounds of discarded electronics per year, the supply is not yet meeting the demand.

National Geographic recently pointed out the effects of the toxicity of e-waste to the environment, as well as the impact of it coming into contact with human life when improperly disposed of. Some of these poisons include lead, gallium arsenide, cadmium, beryllium, mercury, PVC, barium, hexavalent and chromium. They are initially put into devices to make them safe and work properly, however, they are extremely dangerous.

The danger dramatically increases when these devices are improperly burned. Lead damages the kidneys. PVC produces some of the most hazardous carcinogens known: dioxins. Thyroid problems and fetal damage can occur when exposed to brominated flame-retardants. Barium will cause brain swelling after brief exposure, as well as muscle weakness, heart damage, liver damage and spleen damage. Hexavalent chromium can damage DNA, kidneys and the liver. Mercury harms developing fetuses and also causes harm to the brain and kidneys. Beryllium creates a deadly ailment that affects the lungs. Long-term exposure to cadmium can lead to bone and kidney damage.

The ash from the burning of these products, even when being done properly, is poisoning our earth.

E-waste is not something that is going to go away any time soon, in fact, it will only continue to grow. We as consumers need to be cognizant of how we dispose of our outdated electronics and make sure we do so in a responsible manner.