Four Data Destruction Methods That Could Put Your Data At Risk 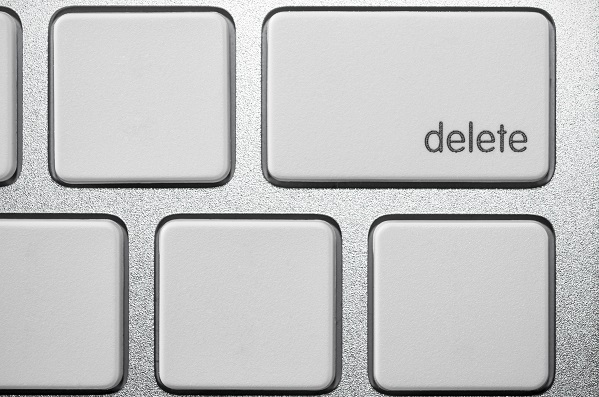 Data security is one of the most important issues of our day. Sadly, data breaches happen often, with many large companies like Sony, Anthem and eBay making headlines. NPR also reported on the emerging black market for stolen health care data.
The Target security breach on the tail end of 2013 is probably the most high-profile case in the last few years, as 40 million credit and debit card numbers were compromised. The legal fallout continued to be in the news a couple months ago, when Target reached a settlement with Visa to pay for the damages, showing how serious a data breach can be legally and financially.
As such, it has never been more important to make sure data is destroyed securely. It’s easy to think you can do it yourself, but many of the common methods for destroying data aren’t nearly as secure as you’d expect. Below are several unsafe data destruction methods to avoid.

The delete key looks like a thing of beauty. You select a file and press the delete key, then that pesky little bit of digital flotsam disappears forever. False.
Deleting a file only does one function: It removes the file reference from that folder, which is what tells the computer where that data is located. That disk space is then labeled as free and new data can be put into that specific location. Meanwhile, the data you thought was gone forever is still on the hard drive, but marked as data that can eventually be overwritten. Assuming you have that much data.
Anyone with a bit of a computer background could get to that data, usually with basic free software. Sometimes it’s so easy that it’s laughable. IT expert Scott Lowe recorded with TechRepublic one experience he had:
“At one organization where I worked, a termination was handled poorly, and the person was allowed to go back to his office unaccompanied to clean up his files,” Lowe said. “He ran through his hard drive and deleted a bunch of files, and then opened Outlook and deleted all of his email messages.
Later that day, his supervisor called me in a panic indicating that all of this information had been deleted,” Lowe continued. “I was able to recover the data by remotely connecting to the machine, recovering the deleted files from the Recycle Bin (yes, the Recycle Bin), and then opening Outlook and undeleting the messages. The recovery process took about two minutes, and all of the information was back where it needed to be.” Moral of the story: Don’t delete your files and assume you’re fine.

Factory resets are another function that will lull you into a false sense of security. A digital security company, called Avast, acquired 20 used Android phones that had been wiped with the factory reset directions. The company was able to get more than 40,000 photos, messages, emails and even some identities of sellers off of the phones. That’s a huge deal. You wipe your phone, you’re supposed to be safe and, oops, too bad. Now some hacker has your embarrassing selfies or, worse, your banking information.
It’s a similar problem to deleting files on your computer. The report from Avast stated, “When a file is deleted, the operating system merely deletes the corresponding pointers in the file table and marks the space that is occupied by the file as free. The reality is that the file is not deleted and the data it contained still remains on the drive or storage card.”
The pretend hackers at Avast were able to get that data with some basic forensic software, in this case FTK Imager.
So what can you do? You’ll need some data wipe apps that do a more complete job, like the ones here.

Another often-used wipe method is reformatting a disk. This process changes the disk so all the space on that disk is relabeled as empty space. Again, this does not completely erase data, just changes how it’s labeled. The data is still there waiting to be overwritten. Same problem, different mask.
Lowe explained there is a straightforward workaround to disk formatting: a $79 program called GetDataBack for NTFS, which can pull all that data right up again. According to a user review, the program pulled data complete with file names, as if the data had never been deleted. In effect, it never really was.

If you’re going to destroy a hard drive, destroy the hard drive. Common wimpy, half-effort methods include drilling holes into the drive and hammering the drive. Drilling leaves parts of the drive that still contain accessible data. Hammering won’t work if you just put a few dents in the drive. You’d have to stand in your backyard with a sledgehammer and completely wreck the thing, a physically exhausting and dangerous activity as parts go flying.

How to actually destroy data

When it comes to data destruction, there are three trusted methods that get to the root of the problem, which is all that leftover data:

This method actually replaces data with new data, thus destroying your old secrets once and for all.

A method that changes the magnetic field of a storage disk or drive. No magnetic field, no data. This method works for hard drives, floppy disks and magnetic tape.

Physical destruction can still be your friend, but you have to go big or go home. This is where an e-waste recycler or data destruction company comes in. It will have the tools and equipment to completely destroy a hard drive. The drive can be shredded, melted and utterly annihilated in general. And as an added bonus, an e-waste recycler will know how to harvest the raw materials for reuse – and prevent any of the dangerous elements found in these devices from harming the environment.
If you need tons of very secure data destroyed, it’s best to call in the professionals. Large amounts of secure files can take a lot of time to overwrite, and protected data can complicate the process. These situations require the most extensive destruction methods, often physical destruction, for the highest amounts of security.