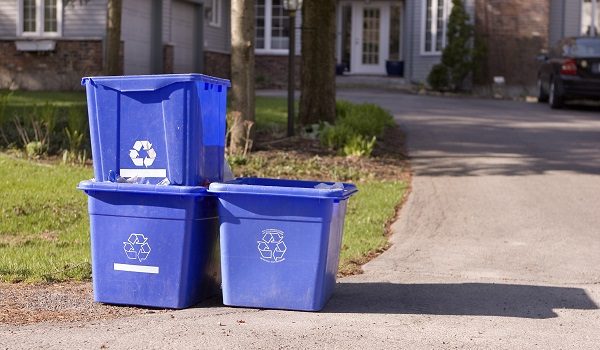 How nice would it be to toss e-waste into a special curbside bin, like the regular recycling or trash? No more calling for pick-ups, no driving to recycling centers, no calling for special recycling kits. It’d all be so easy. So why can’t we, given how much of a pain things are now, recycle our e-waste? The fact is individual curbside e-waste recycling bins aren’t as easy of a proposition as they sound, and below are several reasons why.

One of the most prominent issues of throwing your e-waste into a curbside bin is the risk to data security. Putting old electronics by the curb would require each and every one of us to be experts in secure data destruction. And we all know the person who once tried to use a CD-ROM slot as a cup holder, or they pulled some similar technological antic.
The issue comes from the fact that most at-home, common methods people use to delete data are notoriously insecure. The worst of it is how incomplete factory resets can be on cell phones. Some off-the-shelf forensics software can get anyone right into your old data in some cases, even with following factory reset instructions for your phone.

The problem of volume

The fact of the matter is that e-waste isn’t gotten rid of as often as, say, milk jugs. Cell phones were running at a replacement cycle of 22.4 months in 2014. That’s expected to lengthen to around 30 months by 2016. IPads get replaced in the every-several-years range, and TVs run in the five-to-10-year range for replacement. Computers are recommended for replacement every three to four years for laptops, five years for desktops. And that’s assuming you’re not taking advantage of a take-back program or individually selling/donating the device.
From a logistics standpoint, it just makes more sense to schedule a pick-up of electronics on certain days or go to a drop-off event, since there is less e-waste per week than other types of recyclables. In an ideal system where e-waste is donated and used as long as possible, there should be even less of it.

E-waste also takes more delicate handling. The hazardous nature of e-waste makes handling it downright tricky. Toxic metals like lead, cadmium and mercury, of course, mean e-waste needs to be handled with more care than, say, a milk jug.
Throwing e-waste into a single stream recycling truck on weekly garbage day would be nothing but a safety hazard. Facilities would need to take extra care to sort out e-waste if it’s being collected in a weekly, curbside bin. Improper e-waste handling can cause toxic lead levels in the blood, toxic cadmium exposure in the air and toxic metals on clothing and skin. As such, e-waste may require a different vehicle for pick-up, or a new type of vehicle for sorting.

A concern with cost

City recycling programs are already not cheap, and the cost is a burden that often falls to cash-strapped state governments.
“Solid waste is a service, and any service that’s provided has a cost,” Mitch Kessler, president of Kessler Consulting in Florida, told Discovery News in 2010. His company helps state and local governments establish recycling programs.
“Just like with lawn services and pool services,” said Kessler. “When someone comes to pick up your garbage or yard waste or recyclables, it has a cost … For residential recycling services, the average cost is about $2 per household.”
The cost of recycling would only get more expensive if cities added an e-waste bin program, and this at a time when recycling programs are already slated for slashing.
It doesn’t help that state governments are already on spending slashes. Often one of the services to be targeted is recycling, as is the case in Wisconsin. Proposed cuts from the beginning of the year were looking at a 50-percent reduction in funding to communities. Telling the government it needs to cover curbside e-waste bins in addition might not fly too well.

Meanwhile, early this year, New York City took a hard turn away from curbside e-waste anything. New Yorkers can’t throw old electronics in with their trash or they could face a $100 fine for each offense. That’s a good measure to be sure, especially since the law requires New Yorkers to get rid of their electronics through donation sites at retailers and e-recyclers. There are also community e-waste recycling events and mail-back programs.
Residents in apartment buildings can also enroll in a pick-up program offered by the NYC Department of Transportation and ERI, called e-cycleNYC. Apartment buildings in the city with 10 or more units must store electronics in a secure area before they get picked up. Storage bins are available for buildings with 50 units or more; the locked bin comes pre-made and approved by e-cycleNYC. Any building with 250 or more units can schedule outdoor electronics recycling events.
From a logistics standpoint, e-waste bins only make sense for a certain population density at this point. Fewer than 50 apartment units, and it’s more feasible to keep electronics in a more secure location than in a bin, especially by the curb. Two-hundred-and-fifty units and over creates a space concern for where to keep all the old electronics, and then a donation day is needed.

Success of the current model

The scheduled community donation system is currently a success. For instance, community e-waste recycling events help ERI collect its over 250 million pounds of e-waste that it recycles each year. The events help educate consumers about recycling, garner a sense of community and help usher e-waste into a system that ensures it will be 100-percent recycled.
In effect, it’s safer and more cost and time-effective to schedule an e-waste pick-up or drop-off, attend a donation event, donate or sell a device yourself or use a take-back program.