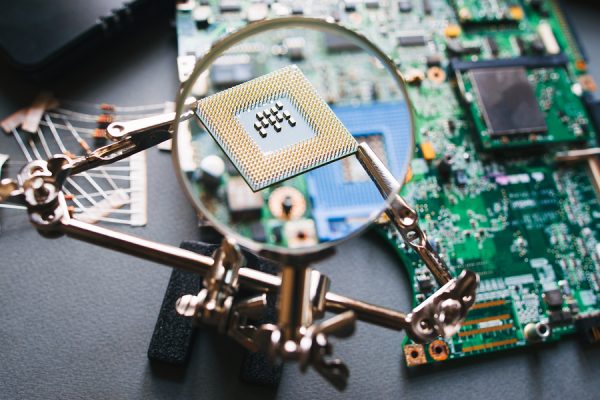 A shift is happening in electronics manufacturing, and though it may be small, it could have a significant effect on the way we look at the e-waste crisis.

While this movement may not yet have a name of it’s own yet, it’s can be simply referred to as replaceable parts manufacturing, or remanufacturing. It addresses one of the biggest hurdles in electronics recycling and its mission to curb the amount of e-waste accumulating worldwide: the hazards of electronics components.

The Problem with Amassing Electronics

While most of us never give what’s inside our electronic devices a second thought, others are hoping to give these components a second chance.

Electronics consist of transistors and mainframes, circuit boards and plastics, glass and batteries without which our modern-day spin zone of text, email and big data would not be possible. Once these devices, and their potentially dangerous components, hit the waste stream, the likelihood that they’ll cause someone somewhere in the world major problems increases exponentially.

The danger stems not so much from the components themselves that wreak so much havoc, but what the components are made of. This includes a slew of chemicals, heavy metals and combinations of the two that even in small quantities, have detrimental effects on the environment and human health.

Cadmium for instance is a rare earth metal found in a number of devices including mobile phones, laptops and tablets that is a known carcinogen. Lead and mercury, two greater known substances, can potentially lead to death in the right amounts. They’re found in just about every electronics device on the market.

In 1995, the EPA introduced the Comprehensive Procurement Guideline, setting out a concise pathway for manufacturers interested in using replaceable and repaired parts to create new devices. The guidelines round out a complete EPA program aimed at helping consumers identify participating companies as well as products with high recycled content.

Programs emphasizing e-waste recycling and recovery are often bolstered by support from the EPA and the procurement program is no different. It’s authorized by the Resource Conservation and Recovery Act, today, the closest the U.S. has come to addressing its current e-waste problem. The program is also authorized by Executive Order 13423 and Executive Order 13514 both of which aim to increase the use of products containing recycled content, i.e. replaceable parts.

The Appeal of Replaceable Electronic Parts

In parts of Africa, India and even some parts of Asia, where the e-waste crisis is in full throttle, the key is repair and reuse. While informal recycling by untrained individuals often causes hazardous conditions, repairing an old device is something many can do without danger. Small repair businesses thrive on revamping used electronics shipped in from foreign countries – mixing and mingling parts until a refurbished device is born anew.

However, the system breaks down when there is a considerable lack of replacement parts to complete repairs. This is very much the case in many states in the U.S. where, rather than recouping the inherent value of most e-waste, recyclers ship a vast amount of it overseas. Recyclers, uninformed or ill-equipped to foster the lucrative repair and reuse process, are more likely to simply follow the expected course for e-waste: smelting, shredding and grinding, with few recovery methods set in place.

Electronic Recyclers International, through a partnership launched in 2015 with electronics repair non profit iFixit, is getting serious about replaceable parts, however. The partnership ensures that the 25-30 percent of materials lost by smelting and shredding reusable (and even unused) electronics get a second chance.

ERI partnered with iFixIt with such ambitions in mind. It’s a pace-setting cooperative effort meant to set an example for more like it in ways that could shift the e-waste crisis out of the red zone and into a more efficient and effective forms of disposal.

The timing for it has never been greater. Already millions of tons of devices are either already in the waste stream nationally or will be hitting the waste stream soon. As even newer devices like Google Home and the Apple iWatch hit the market, the future is already filling up with new technology, and the correlating mass of e-waste is certain to row with it.

What Do Consumers Say About Replacement Parts?

According to IBIS Market, the cell phone repair business is a $4 billion market. This would seem to indicate, at least for cell phones, consumers are happy to repair their mobile devices rather than spend the cash on a completely new device. On average, consumers buy new devices or upgrade about every two years, and more are deciding to stick with old phones despite a few scratches and slower battery life.

If such habits become a lasting trend, it’s another much-needed plus. Changed behavior ranks high in the push toward viable solutions to the e-waste crisis. Since the tech industry is showing little sign of slowing down anytime soon, we’ll need to look to other ways, including increased use of replacement parts, to hone and control our growing e-waste rates.