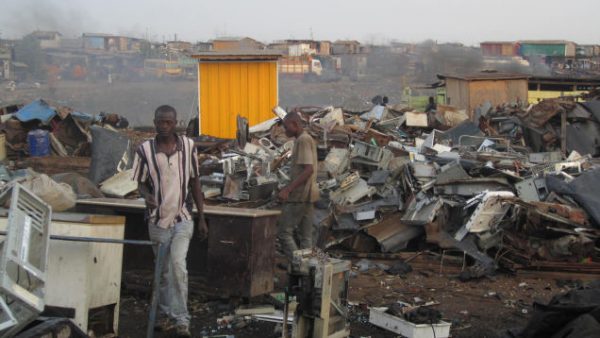 The Basel Convention is an international treaty that prohibits developed countries from transporting various types of hazardous waste, including e-waste, to less developed countries. The United States is the only developed country that has not ratified this treaty, which means it does not have to abide by its rules and regulations.

According to a study published by the Environmental Science and Technology journal, developed countries send an estimated 23% of their electronic waste to developing countries every year. Because there is a growing demand for electronics in the West, this number is expected to rise in the future. Members of the European Union can be penalized for shipping e-waste to developing countries, but they do manage to get away with it on some occasions. However, shipping e-waste to other countries is still legal in the U.S., so there are no consequences for companies that choose to do it.

The Environmental Protection Agency (EPA) encourages consumers to recycle their electronics instead of tossing them in the trash. By promoting electronic recycling, the EPA hopes to reduce the amount of e-waste that ends up in landfills. Why? Although electronic waste only accounts for 2% of the waste found in U.S. landfills, it represents 70% of the overall toxic waste. Electronic devices consist of a number of hazardous chemicals, including  lead, mercury, arsenic, cadmium, copper, barium, and chromium. When e-waste is brought to a landfill, these substances will eventually begin to leak from the devices, where it can absorb into the ground and contaminate the water supply.

When electronics are sent to recycling centers, workers sort through them and remove certain parts such as batteries and toner ink. Then, the electronics are sent through a shredder machine that breaks them down into smaller chunks. The smaller pieces are then separated by material and resold on the market, and the environment remains unharmed in the process.

But, the cost of operating a recycling plant in the U.S. can be high, especially when you factor in the labor that is needed to sort through the waste. The U.S. also has strict environmental and safety regulations that recyclers must abide by, which adds to the cost of operating the plant. Some recycling plants have found that shipping their hazardous e-waste overseas for processing is much less expensive than handling it in the states. But, is it ethical?

Most of the e-waste that is shipped is sent to China, Ghana, Nigeria, Pakistan, India, and Vietnam. Unlike the U.S., these countries do not have safety or environmental regulations in place to protect their people or the environment. For example, Jim Puckett, the executive director of the non-profit organization, Basel Action Network, has witnessed teenage orphans in Ghana burning electronics and releasing toxic fumes into the air. In Nigeria, he observed workers tossing electronic pieces that had no value into a pile and lighting it on fire. Besides harming the environment, these workers are also not given the safety gear that they need, such as goggles and a facemask, to protect themselves from exposure to these toxins.

The Effects of Shipping E-Waste

Toxics Link performed a study in India to test the effects of e-waste in these developing countries. India receives a large amount of e-waste every year—in fact, it is the second biggest receiver behind only China. The study focused on Loni and Mandoli, two regions that are known to process a lot of e-waste from developed countries. Researchers found that the soil in both regions contained high levels of metals, including lead. One sample from Loni had nearly 150 times more lead than the control sample.

The soil isn’t the only thing that has been affected by the amount of e-waste processed in these regions. The study also discovered that the water supply in both regions had been contaminated by heavy metals, including mercury. One water sample taken from Mandoli had nearly 710 times the desirable limit of mercury. Consuming high levels of mercury can eventually affect the nervous system, mucous membranes, and muscle control. Prolonged exposure to mercury can even make it difficult to control the muscles needed to chew and swallow food. Based on this study, it’s clear that these developing countries are suffering as a result of the imported electronic waste.

How to Prevent the Shipping of E-Waste

Recycling is still the best way to dispose of your electronic devices, but how can you ensure your e-waste doesn’t end up in a developing country? Work with an electronic recycler that explicitly states that they do not send their e-waste overseas. Many recycling firms that claim to be sustainable and environmentally conscious still choose to send their waste overseas instead of processing it here in the U.S. In fact, the Basel Action Network conducted an investigation to determine where e-waste went after it was dropped off at various recycling centers around the country. Researchers placed tracking devices inside computers, TVs, and printers, and then monitored where the devices traveled. About one-third of the e-waste that was tracked was sent to other countries, including Mexico, Taiwan, China, Pakistan, Kenya, Hong Kong and the Dominican Republic. The recycling centers that were a part of this investigation did not say they kept all waste in the U.S., but they did promote themselves to be eco-friendly, despite their poor decision to send waste to other countries.

If the company does not openly state its policy, be sure to ask about it so you can learn more about how they process waste. None of the electronic waste processed by ERI is sent to developing countries. For more information on our services, or to request a quote, contact us today.