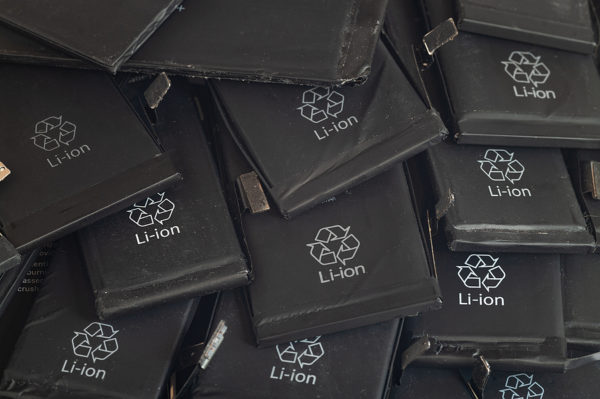 Lithium-ion (Li-ion) batteries are one of the most common types of rechargeable batteries. While the first came out in the 1980s, they were not available commercially until the 1990s. They’re found in many common household and business electronics. It’s certain that your company uses electronics with Li-ion batteries every day.

Smartphones, laptops, rechargeable headsets, tablets, and hand-held scanners are on the list of devices that contain these batteries. Does your company car run on electricity? These batteries are also found in electric vehicles. The majority of Li-ion batteries in electronics have a lifespan of no more than 500 charges, so they need to be recycled after two or three years. EV batteries typically last around 200,000 miles, which is only 10 years if you’re driving 20,000 miles a year.

You cannot toss Li-ion batteries into the trash. They contain harmful chemicals and metal. They’re also hazardous if they’re damaged or charged incorrectly. They’ve also been linked to several fires. Instead, they have to be recycled. How are Li-ion batteries recycled? To do that, you should see what is inside a battery that can be recycled.

Components in a Lithium-Ion Battery

A Li-ion battery has an outer shell that is usually a mix of metal and plastic. Inside are lithium salts, an organic solvent, and an electrolyte. If you look at this battery from the outer “can” or casing to the insides, you’ll find these materials.

Aluminum is commonly used to create the outer shell or “can.” Inside that shell or “can” are four main components: anode, cathode, electrolyte, and separator.

Anode foils are another component of an anode. The foils collect the anode currents and are crafted out of copper or nickel.

The flow of ions takes place between the cathode and anode through an electrolyte. Lithium salt is the most common choice. The specific lithium salt is usually lithium hexafluorophosphate.

You can’t have the anode and cathode joining. Plastic separators keep them apart. Synthetic resins like polyethylene (PE) or polypropylene (PP or #5) are the two choices.

The anode and cathode use binders in their composition. Binders are often polyvinylidene fluoride (PVDF) or styrene-butadiene rubber (SBR).

When you recycle a Li-ion battery, there is metal (aluminum, copper, and nickel), plastic (PE or PP). There are chemical components like lithium salt and lithium oxide and graphite or graphene. All of that has to be broken down. The problem is that the batteries are also flammable when ruptured, so you can’t just smash them apart to separate the pieces.

Upwards of 80% of a Li-ion battery can be recycled. Hydrometallurgical processing is often used to break down metals and plastics in a safe manner. The remaining materials are chemicals and minerals.

Hydrometallurgical recycling involves using chemicals to capture components like cobalt, lithium, manganese, nickel, copper, and aluminum. Those materials go back to manufacturers to make new batteries. Leaching is the first step. Battery recycling facilities often use inorganic acids to recover the metals and minerals without increasing cost. Organic acids like citric acid are another option and are considered to be better for the environment.

Battery recycling has to be appropriately completed by specialists. If a Li-ion battery overheats, it can break down the anode and cause a fire risk. These batteries start to overheat at 176º F. Flammable hydrocarbons release at 230º F. Open flames appear at 392º F.

Not convinced Li-ion batteries are that hazardous? The RethinkWaste Li-Ion battery video shows what happens to this type of battery when a forklift drives over it. Imagine what would happen if that ruptured battery was in a truck full of paper and cardboard recycling. Here are just a handful of fires started by batteries from rechargeable devices.

In the United Kingdom, it’s reported that Li-ion batteries that are disposed of improperly lead to more than 200 fires causing £150 million in damages. These batteries ended up in the regular trash. There, they get punctured or exposed to high temperatures causing them to set other items on fire.

The same fires happen in the United States. Portland, Maine’s EcoMaine Recycling Center experienced a fire back in January 2021. The cause of the fire was a rechargeable tool that had been improperly disposed of. It broke open and lit nearby recyclable materials.

In June of 2020, Tucson Fire Department was called to Tank’s Recycling and Landfill Facility for a fire. Garbage trucks compact the trash they pick up, which ruptures batteries that are disposed of improperly. The fires often start in garbage trucks. If the fire is detected, drivers know they have to dump the load into the road and call the fire department.

One of the worst fires happened in New York. The five-alarm fire is believed to have been started by a cell phone battery. The fire burned for two days and destroyed the facility. Another fire in 2016 lasted almost a full day and is believed to have started with a Li-ion battery. That Texas fire destroyed much of the plant and burned cardboard, paper, and plastic recyclables. These fires were among the 26% increase in North American waste disposal plant fires from 2016 to 2019.

Don’t throw your Li-ion batteries in the trash. You also can’t put them in recycling bins your office building or plant uses. Instead, use electrical tape to cover the positive and negative terminals. Put them in individual plastic bags and place them in a plastic pail. Call ERI to get more information on how we help businesses, government entities, and even other recyclers to recycle lithium ion batteries.

What if you don’t know where the nearest recycling facility is or can’t get there during normal business hours? An easier option is to order a battery recycling box from ERI. Each box holds up to 43 pounds of batteries. Purchase them in packs of one, two, or five. Again, use tape to cover the terminals. Call UPS to come to your business and pick up the sealed box.