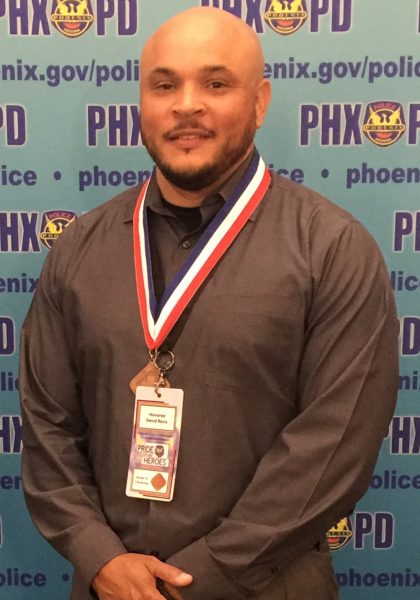 David Revis, who serves as Senior Environmental, Health & Safety Manager for ERI, the nation’s leading recycler of electronic waste, was honored with the ‘Certificate of Lifesaving’ this week by the Phoenix Police Department and the City of Phoenix.
In an award ceremony hosted by the Phoenix Police Department at the Comerica Theatre, Revis was commended by Phoenix Police Chief Joseph G. Yahner for springing into action and saving a man’s life at Phoenix Sky Harbor International Airport last year.
Revis’ heroic actions took place when he and a colleague were rushing to catch a flight back to ERI’s Fresno location. On the escalator walkway, Revis was behind an older man and his wife. Revis noticed that the man was struggling to stay conscious and began to fall backward. Revis caught the man, whose face was turning from red to blue due to an apparent heart attack. As the man’s wife started panicking, Revis immediately laid him down flat on his back and started administering chest compression, followed after a few minutes by mouth-to-mouth resuscitation in order to provide the man’s brain with oxygen.
After a couple minutes of CPR, the man’s color began to return to normal. Revis called out for additional assistance and within a few more minutes, an officer showed up and assisted Revis with chest compressions. Revis helped the officer hook the man up to an automated external defibrillator (AED) and proceeded to give him several shocks.
The man responded with a deep breath and though still unconscious, had begun breathing again. Revis then left his ERI business card with the officer and rushed off to catch his flight home. As it turns out, his heroic actions saved the man’s life.
This week’s ceremony in Phoenix honored Revis for his quick-thinking and selfless actions.
“We are a company of people that do the right thing – it’s part of our culture and what we strive for every day,” said John Shegerian, Chairman and CEO of ERI. “David exemplified this spirit by stepping up in an emergency situation, doing the right thing and saving a man’s life. We couldn’t be more proud of him for his heroism and this well-deserved Certificate of Lifesaving award from the City of Phoenix and the terrific first responders there.”